Ahoy!  When you combine a love of pirates with a love of reading you have hours of fun.  This list of Pirate Books for Kids contains 35 books that will add spark to your imaginative play and story telling.  You will want to check your local library to see how many of these books you can borrow for free.  Once you have your favorites you will  be able to purchase them to add to your book collection.

Captain Flinn and the Pirate Dinosaurs by Giles Andreae

Fluffy, Scourge of the Sea by Teresa Bateman 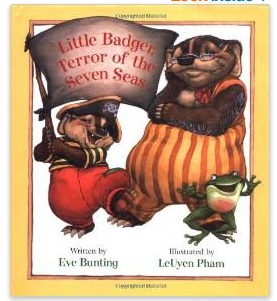 Little Badger, Terror of the Seven Seas by Eve Bunting

Louise: The Adventures of a Chicken by Kate DiCamillo

The Night Pirates by Peter Harris

Pirate Pete’s Talk Like a Pirate by Kim Kennedy

I Love My Pirate Papa by Laura Leuck

How I Became a Pirate by Melinda Long

The Pirate of Kindergarten by George Ella Lyon

Blackbeard and the Birthday Suit by Matthew McElligott

Edward and the Pirates by David McPhail

A Pirate’s Guide to First Grade by James Preller

Shiver Me Letters: A Pirate ABC by June Sobel

Commander Toad and the Space Pirates by Jane Yolen

Port Side Pirates by Oscar Seaworthy

Pirates of the Sea by Brandon Dorman

The Pirates Next Door by Jonny Duddle

Is this list missing your favorite pirate story?  We would love to hear what we are missing….or which book from the list….is your favorite!